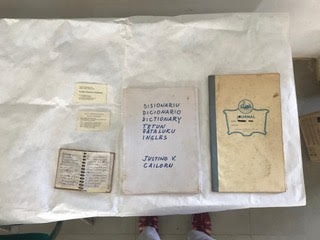 In 2020, MHI and the Valentim family, with the support from UCLA Library’s Modern Endangered Archive Program, commenced a digitization project, intended to support the preservation of critically endangered Vaihoho sung-stories of the Fataluku people of Timor-Leste.

Vaihoho are considered the Fataluku’s most valued repertoire, as the major form of their continuing oral tradition (Rappaport, 2015).  Despite this, both the poems and accompanying music of Vaihoho are considered critically endangered, with an estimated thirty percent already lost (MHI, 2017). Most living Vaihoho proponents are of mature age, and the significant cultural disruption that has occurred over recent generations because of war and colonisation has meant that younger generations have not been actively engaged in learning these practices. Because Fataluku has only been a written language very recently, little of the material has been documented in written forms or on media that would enable access by current or future generations.

In response to these circumstances, Fataluku cultural knowledge holder and researcher, Justino Valentim worked over a period of years to gather a large collection of Vaihoho song-poems and accompanying music from across Fataluku country. However, Justino’s untimely death in 2014 meant that the collection of Vaihoho poems that he worked to document had not been stored in a form that protects their safety and makes them accessible to current and future generations. In digitizing this collection, Justino’s family and former employer (culture-focussed NGO Many Hands International) sought to honour Justino’s intention that his community have access to the material to know their own culture, and to ensure that the material be better protected from various risks, such as humidity, wear from use, and poor storage conditions.

Justino Valentim's son, Danny (pictured on the right) has joined the MHI team and will work with us over a 12 month period to carry out the project, which involves the digitisation of the material, the preservation of the original material and community consultation and research.

The collection is being compiled from exercise books filled with hand-written and typed records of vaihoho poems and notes, with the material dating from 1999-2014. The original material has been temporarily relocated to the Lautem Cultural Centre, Lospalos, Timor-Leste. In February, staff received training on digitisation, file naming and folder structuring according to the IDEP guidelines. They also learned about measures to undertake to enable the Valentim family to store the material more safely, once returned to the family home.

The project is funded by UCLA Library in the USA through its 2020 Modern Endangered Archive Program. Project partners included the Valentim family, NGO Many Hands International, The District Adminstration of the Lautem Municipality, the Government of Timor-Leste, and the Faculty of Fine Arts and Music, University of Melbourne.